It All Comes Together

So - to pick up from the previous post - after the closure of THiNG magazine in 1996, I poured myself into my career at the radio station and began a series of little events around the city.

In 1997, Fluid nightclub opened around the corner from my house and I began a Sunday night event with my friend Jorge, who spun deep house and old-skool garage tracks. The party was called CHURCH, cause every Sunday ya gotta go to church, y'all. ;)

I also began to host birthday parties for myself at Tattooed Mom on South Street. They started off innocently enough, but soon became quarterly events and the stuff of legends ... the saying went "you're never more than 90 days away from Robert Drake's birthday!" I think I aged about 60 years in the past decade ... haha.

There are other stories I want to tell - but I am going to jump past them right now, so I can finish this thread of being a publisher. I'll get back to the 1990s in the next post.

In the year 2000, I had a full-circle experience occur. I had lunch with Mark Segal, owner of the Philadelphia Gay News [where I had volunteered time back in 1981/82]. The last time I crossed Mark's path, with exception to public events, was back in 1986 - when I was the General Manager of Au Courant Newsmagazine and obviously a thorn in his side at the time.

Since THiNG had folded, and some of the elements of THiNG had wound up in the PGN, Mark wanted to chat about working together to start a new publication in Philadelphia. The fact was, the city was on the verge of a new era and, sooner or later someone from outside would see the potential and open a nightlife magazine targeting the gay community. Instead of waiting for competition, why not open it yourself!

Mark knew me. He knew my work with Au Courant, and he knew my passion with THiNG. So, together we mapped out a plan to launch a full-color, glossy weekly free magazine. But it needed a name. 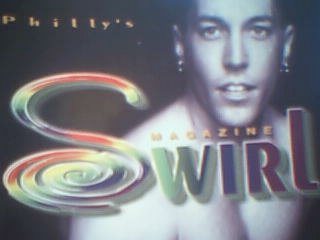 I spent the good part of a week writing down a list of ideas ... the one that stuck the most was SWIRL ... since it had a queer ring to it, and it represented what the magazine was to be: a mixture of pop culture and pictures. I met with my friend Kate, who was a freelance designer and together we began to create every detail of a magazine: logo, layout, fonts, content ideas, marketing tools, and more. 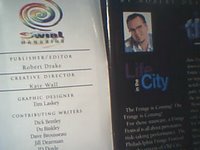 We spent from fall of 2000 until January of 2001 creating and pushing to give birth to our baby. The debut of SWIRL hit the streets in February of 2001 and was an instant success! Truly it was - there are people today that still remember the little magazine that could. I ran into someone this spring who still has a collection of our entire run, and we're talking 5 years ago!

We tweaked the design and content over time but easily the highlight was PROOF, our centerspread of candid shots of nightlife in action. EVERYONE wanted to see who was in this week's PROOF section and that just kept the issues flying off the racks. The hardest part was to convince advertisers to support this publication. 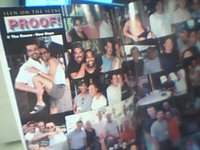 In hindsight, I would have had chosen to have exclusive sales reps, versus having the reps from the PGN work on selling both products. I feel that, by large, they didn't push hard enough - partly since they had their foundation of commissions already set with their weekly ads in the PGN.

Additionally, I would have not gone with such a heavy stock - but we wanted the magazine to look fierce, so we went totally gloss. I probably would have chosen a more thin stock for the inside and kept it wrapped in heavy stock, for durability.

In fall of 2001, we were finally hitting a stride -- new ad contracts were beginning to be signed and things were promising; then September 11.

That changed everything. Everyone pulled back - bars and businesses didn't want to waste any money on additional advertising. Anyone looking for a reason to say 'no thank you' to our sales reps, used 9/11. We closed SWIRL the first week of October, 2001.

The irony is we were ahead of our time. Had the magazine hit the streets in 2004, we'd be a staple in the hands of those out at night. The influx of new blood into Philadelphia over the past three years (many from NYC), has created a boom in after-dark business. Restaurants, nightclubs, galleries and tourism have shot off the charts. I would have targeted the magazine to serve those "left of center" versus strictly a gay rag, thus picking up new revenue streams of potential advertisers.

Alas, it's always about timing.

At least, I have the experiences. I can comfortably say that I didn't sit back and just complain that this city doesn't do this, or this city doesn't have that ... when I see something this city lacks, I just do it. It's been who I've been for 25 years. I can't imagine looking at things another way.
Posted by Robert Drake at 7:27 AM 2 comments: