The Legendary West End Records, founded in 1976 produced some of the most memorable hits from the 70's and 80's. Francis Legge has been making a Documentary to honour Mel CHeren and all the work he has put into the music industry and the world of nightlife. The movie will be coming out later this year so look out for it! But for now - check out this teaser - talk about an education! 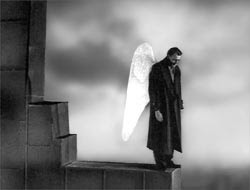 The year was 1987. For me it was a transitional year since I had just left the world I knew to reside in a world I knew nothing of. One weeknight I snuck back into Center City to attend a screening a film that I had read about - called Wings of Desire. It was a German film, produced by Wim Wenders, who I was already a fan of - thanks to Paris, Texas and Hammett.

Those two hours changed my life and allowed me to begin the process to better understand myself and my path. I was mesmerized by the writing, the acting - the way the film plugs directly into your emotions. I remember being at the Roxy Theatre on Sansom Street watching this movie -- tears just streaming down my face for so many minutes. It was a cleansing experience for me - and each time I watch this film, I cry and I smile; knowing that all is alright.

It showed me that all my friends who have gone are never far away. Anyone I miss can be within my mind at the simple mention of their name. I am always surrounded by the love from my friendly spirits of my past. They help me and guide me through life each and every day.

In case you don't know the story behind Wings of Desire; it is set in Berlin in the late 1980s, toward the end of the Cold War, it follows two angels, Damiel (Bruno Ganz) and Cassiel (Otto Sander), as they roam the city, unseen and unheard by the people, observing and listening to the diverse thoughts of Berliners. Although Damiel and Cassiel are pure observers, invisible to all but children, and incapable of any physical interaction with our world, one of the angels, Damiel (Bruno Ganz), begins to fall in love with a circus trapeze artist named Marion (Solveig Dommartin), who is talented, lovely, but profoundly lonely.

Marion lives alone in a trailer, dances alone to the live music of Nick Cave and the Bad Seeds, and drifts through the city.Eventually, Damiel too longs for physicality, and to become human. When he sheds his immortal existence, he experiences life for the first time: he bleeds, sees colors for the first time (the movie before then is filmed in a sepia tinted monochrome, except for brief moments when the angels are not present), tastes food, drinks coffee. Eventually Damiel meets the trapeze artist Marion at a bar, and they greet each other with familiarity as if they had long known each other.

Solveig's character was the one I bonded with the most. Alone with her thoughts and wandering through life with no direction - longing for a sign, a touch... something. She spent her days with a traveling circus only to watch it leave her behind - and spent her nights at new wave and punk clubs - trying to escape from herself, to no avail.

When Wim decided to put to film a story that he and Solveig (who was his girlfriend at the time) had created - you can bet that I was there on opening night. It was 1991 and the movie was Until the End of the World - which was the ultimate road movie and really two movies in one! Solveig's performance is riveting in this as well and the film itself is an epic (the director's cut is 4.5 hours long) ... but what a way to escape a gloomy Sunday afternoon!

So, it's with sadness that I make this post, acknowleding the sudden passing of Solveig Dommartin at only 45 from a heart attack.

Although I never met her, I feel as if I connected with Solveig in so many ways - she was my virtual friend I leaned on during the hardest years of my adult life ... it was Wim's vision and her performance that gave me hope and showed me a light to guide me during those dark days.

I am grateful that her memory remains on film.

Here are two clips I want to share - the first is when angel Damiel is inside the lonely trailer of Marion, who has just entered after a night's performance. Having just put the needle on the Nick Cave lp, 'The Carny' plays in the background as Marion sits alone with her thoughts - thoughts that Damiel hears and obviously relates to ... this was a powerful moment for me when I first saw the film:

Next is THE performance ... grant it, you lose some of the emotional connection to the movie by seeing this on its own ... but it's so powerful of a scene; when the human Damiel finally comes face to face with the one he desires and she is not at all surprized but instead ready...