Although my father passed away 14 years ago, I still carry him in my heart and think of him often.

Many people don't know that I am, in fact, a junior. Robert Drake Sr. was born in 1939 and was always the rebel. A lot of my personality comes from my father - he was into music and the radio industry and, after my parents divorced when I was 6, he remained a bachelor - living the independent life as wonderfully as he could. Although connected to his brother's family tree, my father's family was comprised of his circle of friends; just like me.

He was always there to help others - he made some incredible friends while hanging at a bar and was respectful of those that showed him respect. He was a biker, a mechanic, an event promoter, a showman, and a loyal friend to many.

I am proud to carry on many of his traits in my day to day life.

So Happy Father's Day Dad... I'm sure you're pretty proud of me too.
Posted by Robert Drake at 8:25 PM No comments:

Tales of the City, Reunited

It was the summer of 1980 and I remember discovering a bookstore in Center City that became my home away from home - it was Giovanni's Room. What began on South Street in the early 1970s moved to the corner of 12/Pine streets and quickly established itself as the epicenter of the local lesbian and gay community. 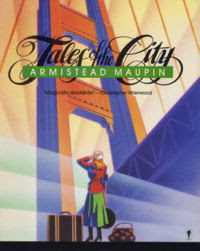 The first 'gay' book I ever read was Tales of the City, written by Armistead Maupin. The book came out (no pun intended) back in 1978 but it wasn't until the summer of '80 when I was first introduced to the spirits and personalities that climbed the stairs of 28 Barbary Lane in San Francisco.

When I discovered Tales, Maupin's second volume was just being released; More Tales of the City. By then I, along with millions of other readers worldwide, were connecting to life in the City by the Bay.

I absorbed every word that Maupin wrote as if it was being sent by wire, direct from the West Coast to me, filling me in with the daily antics of friends I never met but knew deeply. I learned about live, love and all the precautions that surround things like anger, forgiveness and resentment.

As each book came out - there were five official volumes in the series, although many consider Sure of You the sixth - I was amazed at how much my world ran parallel to the world that laid within the covers of each book. Sure, there were unique differences; but the emotions were just as strong, the passions just as pure and the painful reality of aging, or not having a chance to, just as painfully real. 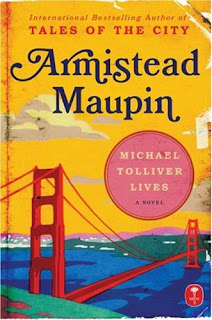 When I first got word that Maupin was going to write a new novel that, although not an official volume in the series, but lovingly titled Michael Tolliver Lives, my heart bounced. Michael Tolliver was the central character to Tales and it was like hearing from an old friend - - something that happens all too infrequently these days.

According to Maupin, the cover of his new novel is meant to look cheerful but battered, a hopeful survivor of the 70s like its protagonist. The book was released June 12 - a day that the Mayor of San Francisco proclaimed "Michael Tolliver Day"

Yesterday morning I received my copy of the novel while at work - and like a dieter avoiding sweets - it took all my will to not push aside my To Do list and just sit at my desk and dive in!

Today being Saturday, I blocked out a few hours and opened the book.

For those of you who have never read the Tales series - or never watched the PBS/Showtime mini-series based on the first few volumes - the following might seem a bit ... odd, but humor me. :)

The title tells you the story - Michael "Mouse" Tolliver is alive and breathing by the Bay. At first Maupin lays out the current state of Michael's life and - just as Maupin said in an interview recently - slowly the colorful cast enters the storyline as natural as life is. You are reunited with some and sadly, brought up to speed on the passing of others.

With the turn of each page you realize that a family tree is only as strong as its roots. And, just as magically as Maupin did through the 1980s, you experience a wide range of emotions during the read.

I truly did not put this book down upon opening it. I laughed OUT LOUD at a few parts and was brought to tears by others. It's as if I've caught up with old friends ... people I missed who kept me sane during an insane period of my life.

At one point - Maupin quotes the ever-mystical Anna Madrigal, when commenting on growing old: "You don't have to keep up, dear. As long as you keep open."

This book is an affirmation of growing older and wiser and a wonderful read - even if you've never set 'foot' inside 28 Barbary Lane.
Posted by Robert Drake at 5:03 PM 7 comments:

I Am He And He Is Me

Some of you may be familiar with Robert Rodi from some of his previous books--1991's "Fag Hag" being the most infamous. Many have said that Rodi is one of the funniest and most prolific of gay authors writing today. His new book 'When You Were Me' is sure to reinforce his already wonderful reputation and I spent some down time this weekend breezing through the review copy I received at work.

The novel centers on Jack Ackerly - who, at 53, has a life that many simply dream about; independently weathly, Jack has the time to do whatever he wants. Frustratingly, Jack only wants to relive his youth.

Enter a few juicy players - including a steamy 26-year old named Corey - and next thing you know, with the help of a scattered new age witch named Francesca, they are offered the chance to switch bodies. To both of their surprises, the spell works, and they go their separate ways.

Jack (now Corey) initially tries to party like the 26 year old his body tells him he is, but finds that his maturity and experience gets in the way. Corey (now as Jack) tries to cope with Jack's severe allergies, tries to go on a workout regime to tone up Jack's otherwise-healthy body, and tries to step into Jack's life with his acquaintances that Jack had briefed him on.

There are some great moments in the light read - including a great twisted ending! I easily see this as PERFECT beach reading this summer ... even if you have no intention to step out on the sands. Nicely recommended.

But reading this book got me thinking - if I could, would I swap my body and life with that of a young hot thang?

A knee-jerk reaction is Hells-No! I did that once and I don't want to do it again ... but what if I did do it again, but with all the knowledge I have now embedded within my head? Would it make the experience any different? Would I live through my 20s differently the second time around?

What about you - would you?

However, the reason it's an end of an end, etc. is because the 'era' truly ended in 1996, when JC Dobbs closed its doors. The new owners gave the club a (some might say unneeded) facelift and reopened as The Pontiac Grill.

Last year The Pontiac, after haphazardly trying several different approaches, gave up and closed - ending live music at 304 South Street. Then they opened - without any heart - and hosted occasional, one-off gigs ... this Saturday night they will host their final gig ... finally.

Some are sad to see the transformation from music club to clothing store. Personally, I felt that sadness when Dobbs left the strip - and the big D that hung over the stage and its patrons, was taken down and stored away.

Since then the space had no personality. It tried ... actually it didn't try; individual promoters tried to create scenes there ... the club owners constantly derailed any motivation by shifting plans and visions.

As it stands now - with the exception of the TLA (or the Fillmore Philadelphia at the TLA ... whatever), South Street is a void for live music.

I never thought that the street that I grew up on; the street that Grendel's Lair, Ripley, Dobbs, 218, Abilene's, along with a few others once called home - would be so silent.

So, as we inch closer to the final END OF AN ERA, I wanted to share some interesting video clips of a happier time...

The first clip is the most interesting - sadly it cannot be embedded - so check it out! It's a chat with the former owner of JC Dobbs John Travis, as he talks about the very early days of Dobbs & performers such as The Stray Cats & George Thorogood and the Delaware Destroyers.

Goodbye to live music at 304 South Street - it was fun while it lasted!