The Time Has Come.

26 summers ago, to celebrate my freedom from the chains of high school, I went to the opening of one of Philadelphia's most nortorious punk/new wave venues ... The StarLite Ballroom, underneath the El at the Huntingdon stop. I had known the building, since it was in a neighborhood I was familiar with, as my grandparents lived two blocks away on Amber Street. We spent many a day at Kelly's Korner - a warehouse of junk, available at low prices!

So, when the StarLite was to open, I was on the radar ... and although I didn't get to go to the Friday opening night with live performances from The Go-Go's and X, I did go to Saturday night and caught a blistering set from Pere Ubu and the debut of a new sound in Philadelphia, compliments of a band known as Bunnydrums.

26 summers later and original Bunnydrums members singer/frontman David Goerk and guitarist Frank Marr joined up with fellow musicians Howard Harison, Marc Laurick and Michael Mongiello and reunited the Bunnydrums sound perfectly at a tease performance back in July. Now, we all get the chance to appreciate their unique styles and sounds this coming SATURDAY, SEPTEMBER 30 at the North Star Bar, as I host:

BUNNYDRUMS: In Concert
with
the legendary KING OF SIAM
and
something new, NORTHERN LIBERTIES
21+ show / doors at 9 / tickets are just $8 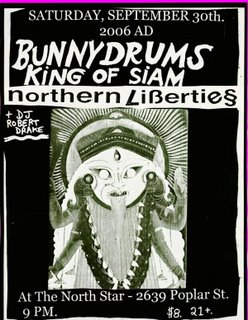